Two towns top the list of Fenlason favorite Jeeping destinations. Moab, Utah is one of them. (The other one is Ouray, Colorado.) This video shows off why!

We extended our stay in the red rock labyrinth set on conquering two final challenges: Dome Rock and Gemini Bridges.

Little did we know what the extra two days held in store . . .

It began like any other day. Mom packed the lunch. Kids gathered the gear. Dad checked the oil, tires, and gas. The entrance to Dome Rock trail began an hour from town–an hour from cell service . . .from ANY services. 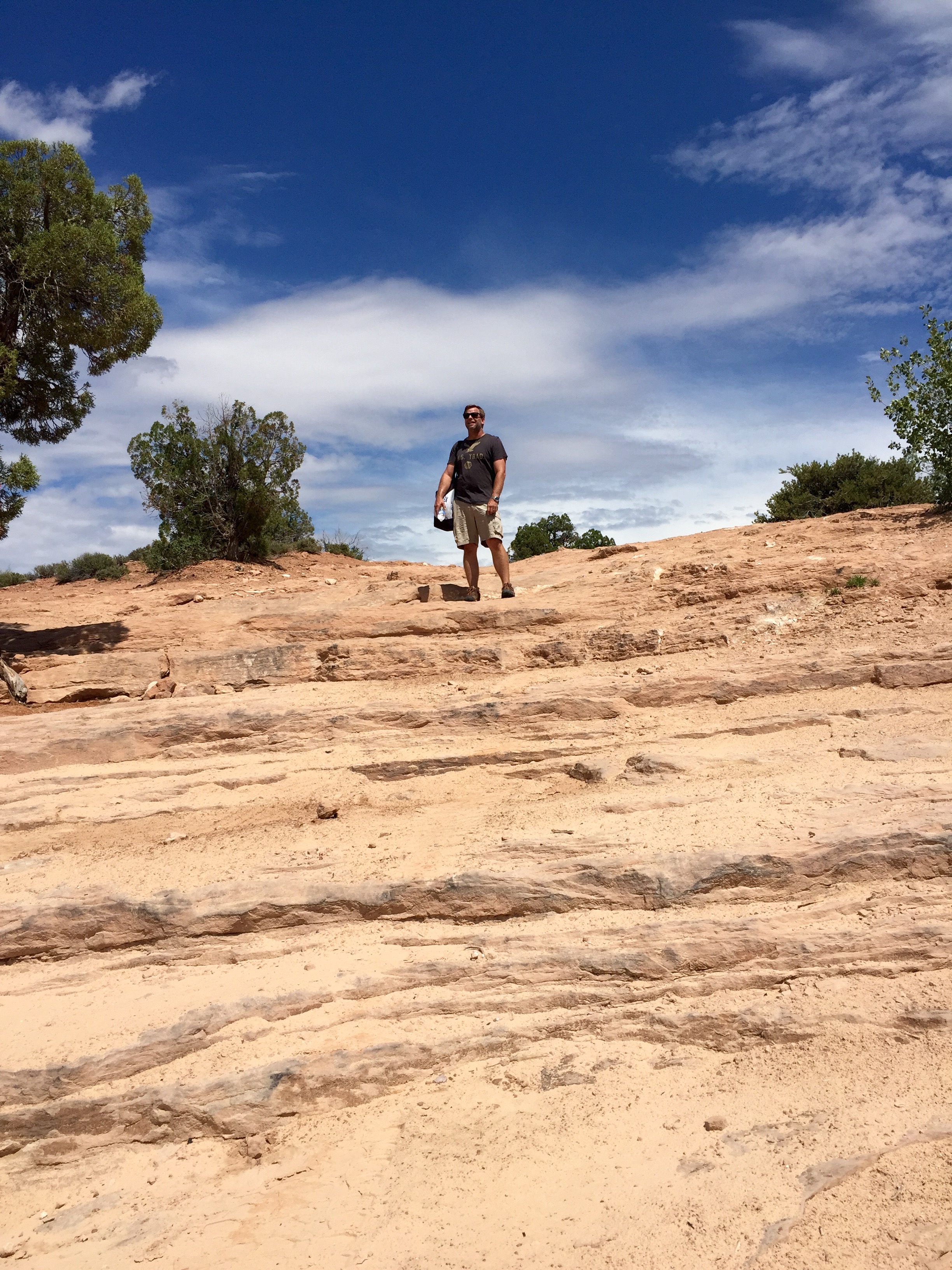 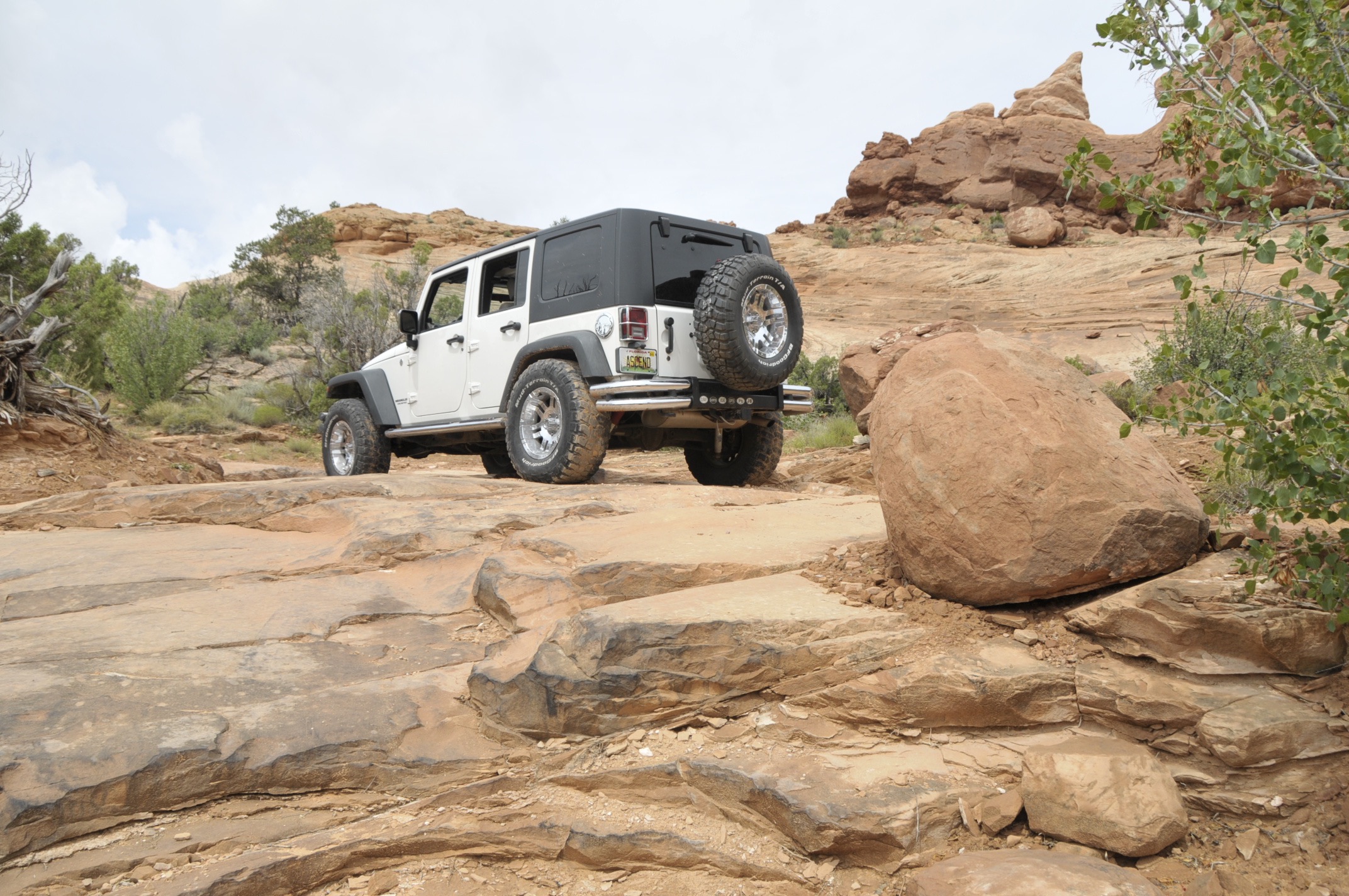 Our first challenge was “the steps.” We lowered the air pressure in the tires and the Jeep climbed right up these fellas! (Did I mention we have a really amazing driver!)

Two hours into the trail, something strange happened. Coming down a steep descent, the transmission stopped shifting. The gears would not engage. The wheels stopped moving and we were stuck in “bowl” at an intersection of trails that all went uphill. 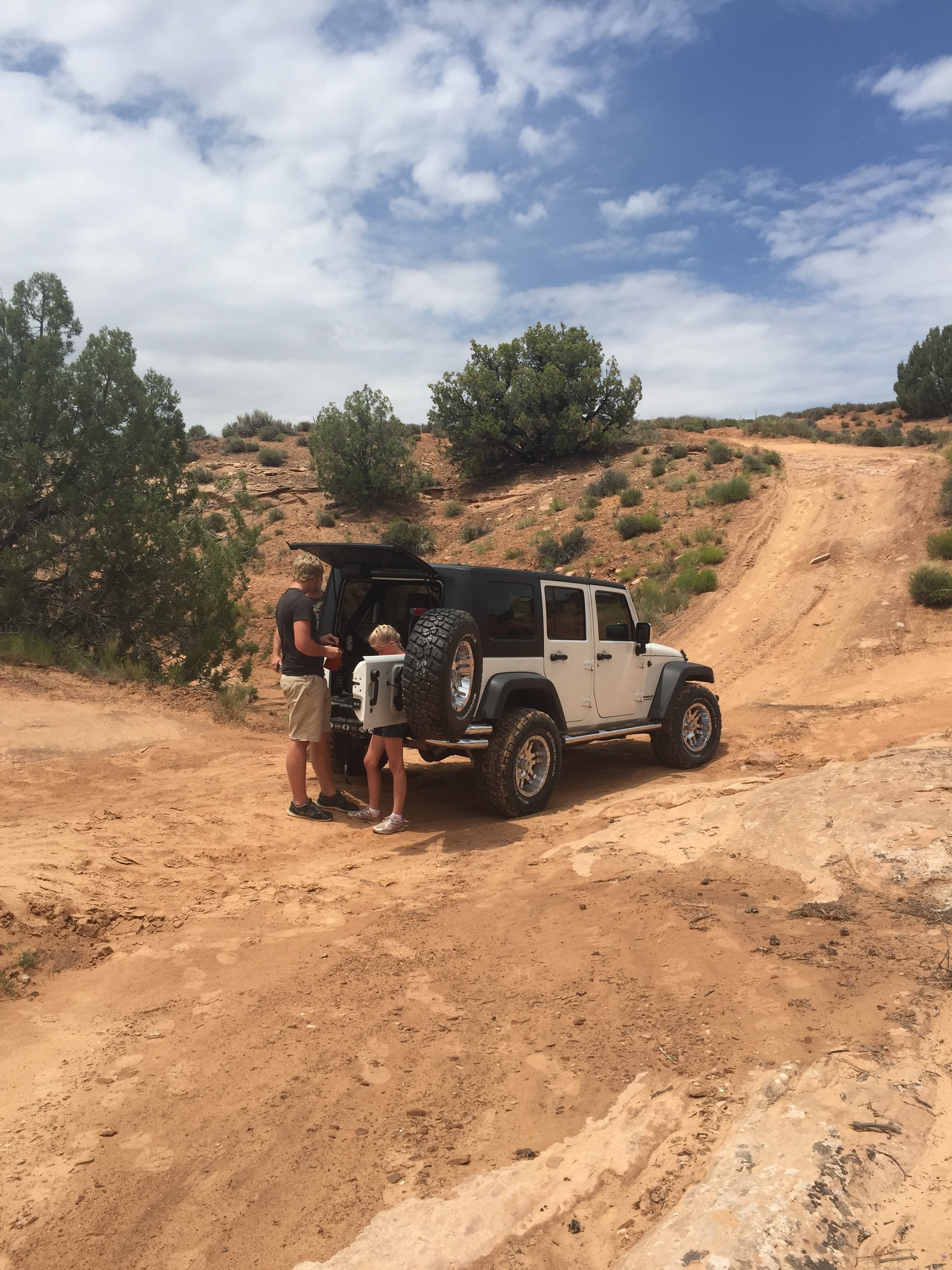 What to do? Jordan and Alyssa gathered the hammocks to find a place in the shade. We would wait a bit. Maybe another Jeep would come by and be able to get us help. Jarred hiked up to a higher spot hoping to find a little cell connection. There was none.

Then the boys had a moment of inspiration . . .

Jarred’s parents have been Jeeping in Moab with us in the past; they know the area and where to get help. A text was sent to Amma and the phone attached to the drone. Perhaps up higher–say 400 feet higher–there might be a bit of 4G or LTE if we were really blessed.

Not sure if that worked, but we weren’t waiting around any longer.

We took one last selfie with the Jeep, attached a note on the windshield with our plans to hike out, and took off with a hammock-modified-into-a-backback full of water bottles, and headed out on foot. 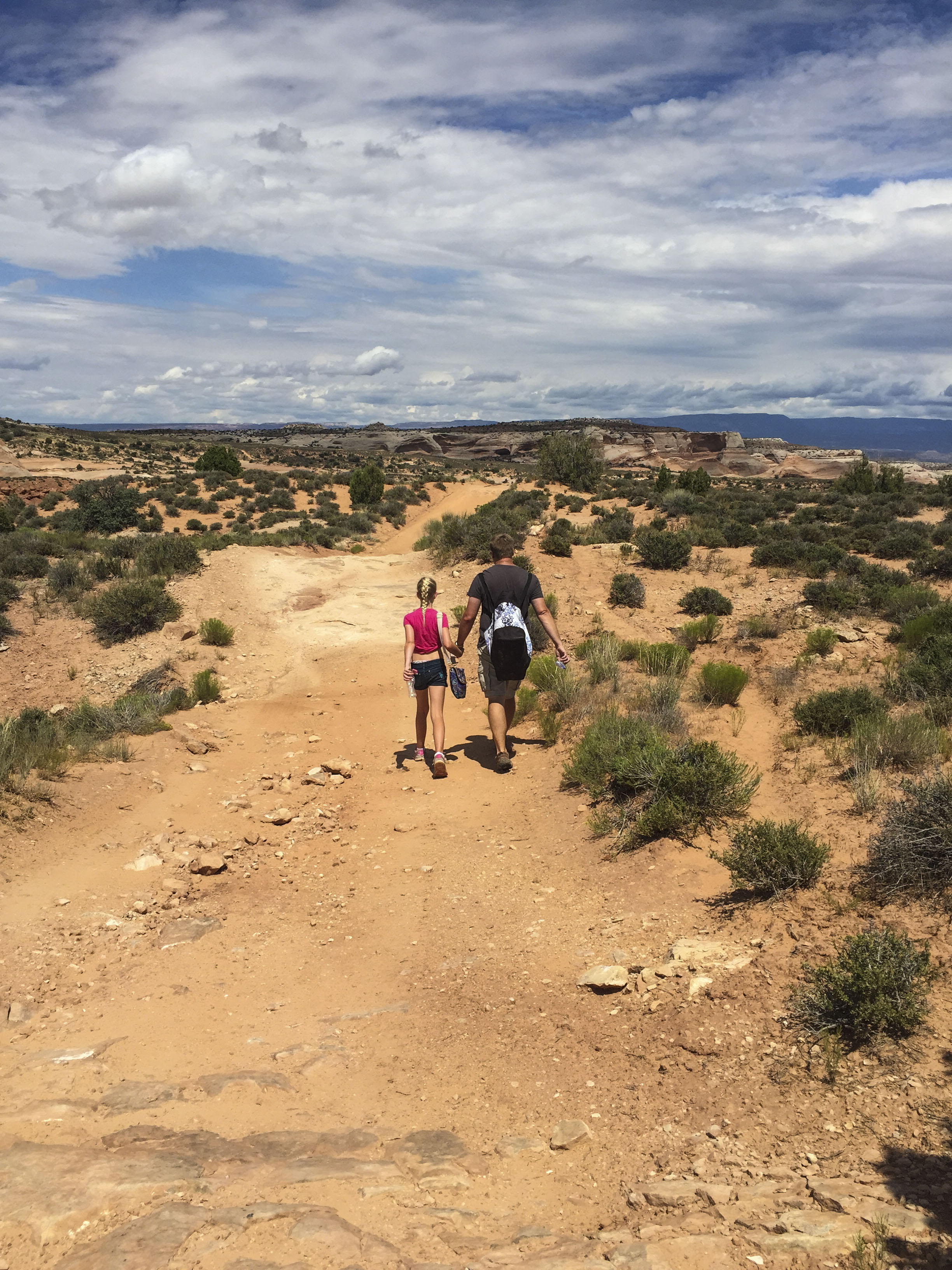 Approaching the distant rock formation, we discovered one bar of service and called 911.

Us: “Our Jeep broke down 2 hours into Dome Plateau and–”

911: “Suzanne Fenlason has already called us and a deputy has been dispatched . . .”

Last time we were here, Moab was the filming site for much of The Lone Ranger film with Johnny Depp. It’s landscape is desolate, dry, and very rough and rocky. The area sees at least one adventure-related death a year and “Search and Rescue” is sent out on average 100 times a year. 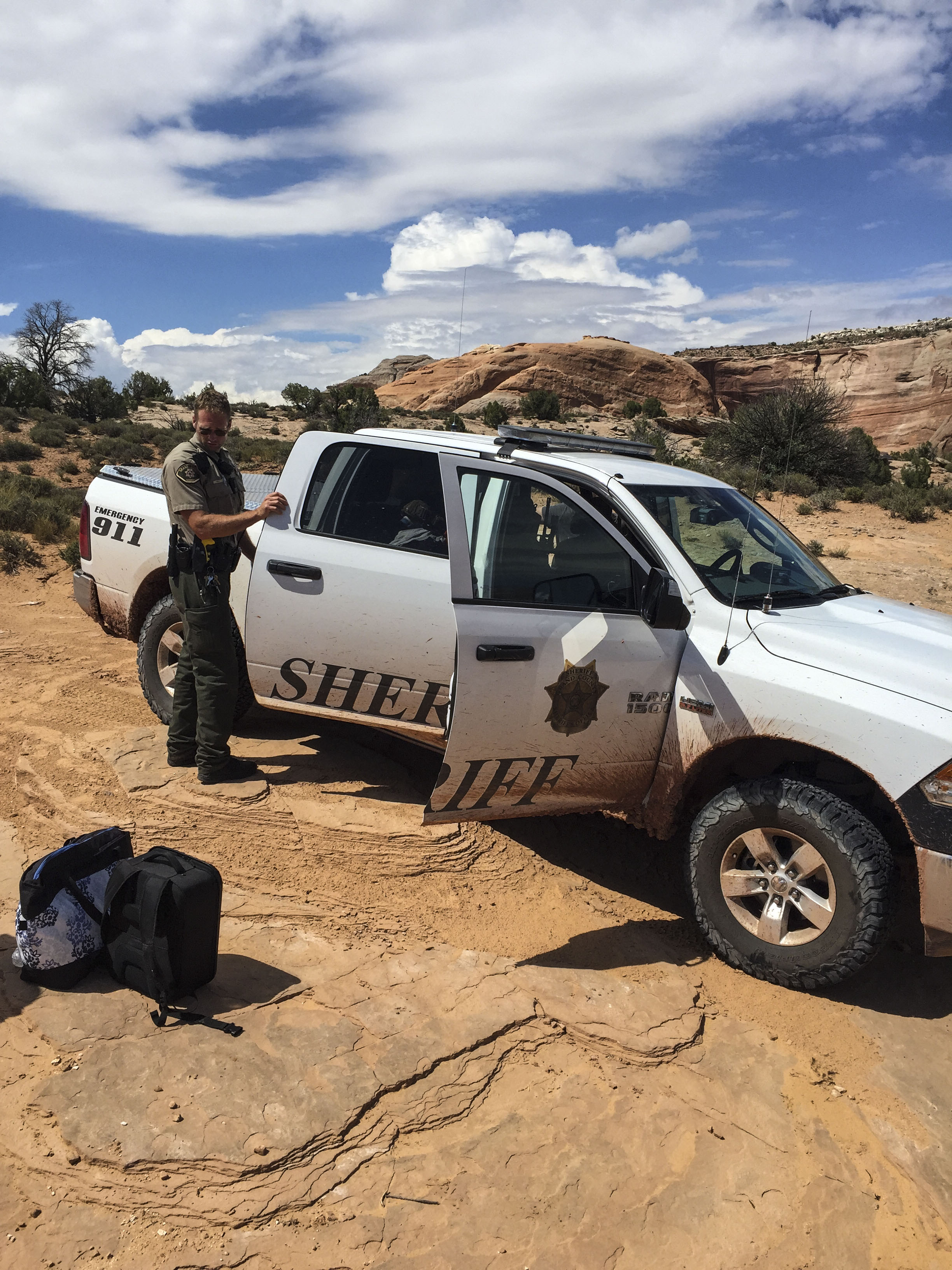 The Fenlason family was their 70th rescue call so far in 2015. 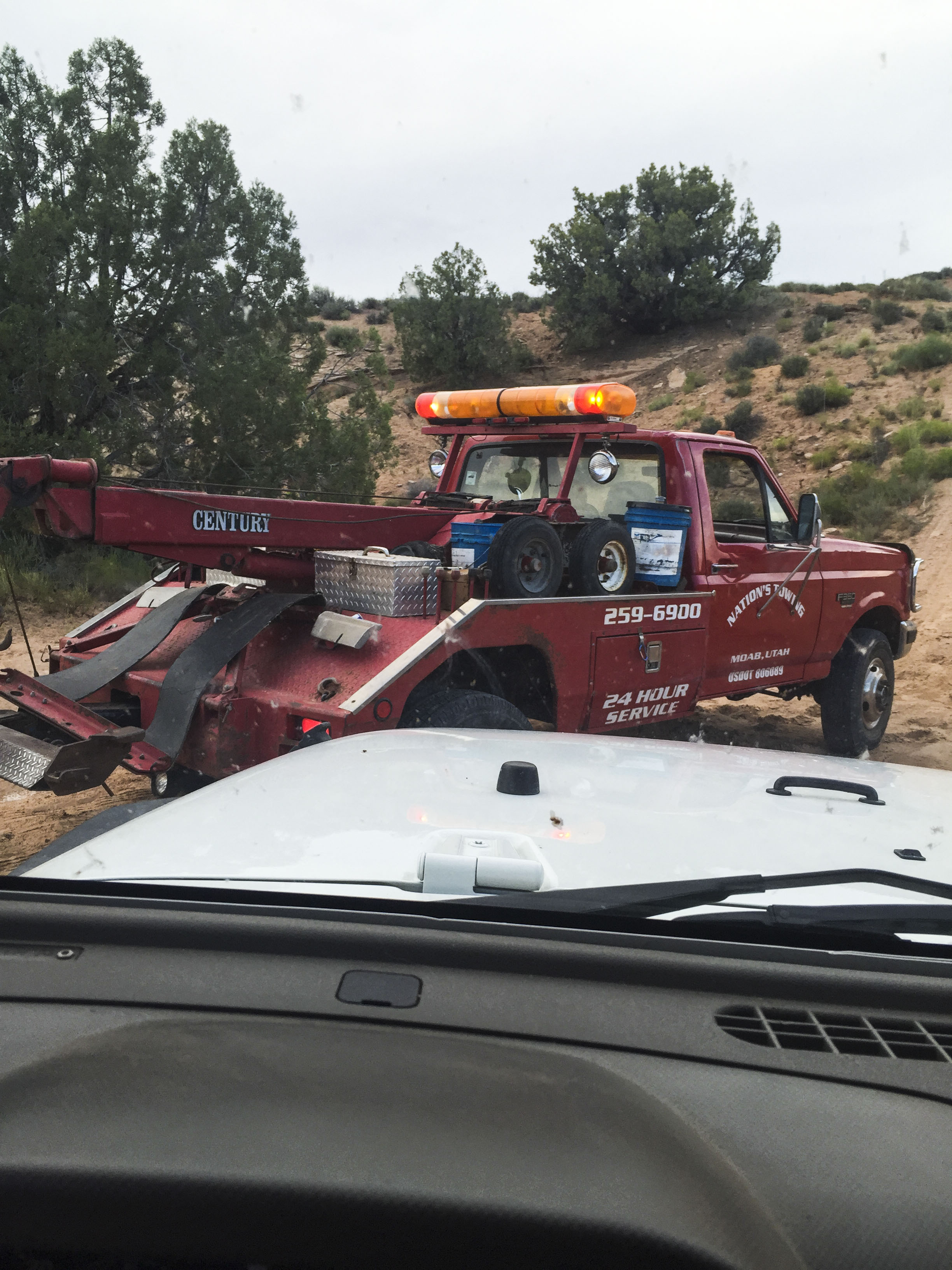 The mileage added up and we received a bill for $680 from the Moab towing company. Next morning, the Jeep was fixed for $35 in labor in 10 minutes with a $3.99 plastic piece that had cracked under the 4-wheel drive gear shifter.

Yep. That’s how it goes sometimes when you live a life a epic adventures! 🙂

You would think that we would be begging for a day off–a day of rest–maybe laying around the pool at our campground, or a nice game of Clue around the picnic table. But NO– there was still one challenge left untamed. 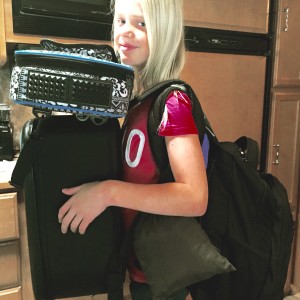 Alyssa is a trouper! Getting the gear together: Backback full of waters, hammocks, drone, and ukulele. Check! 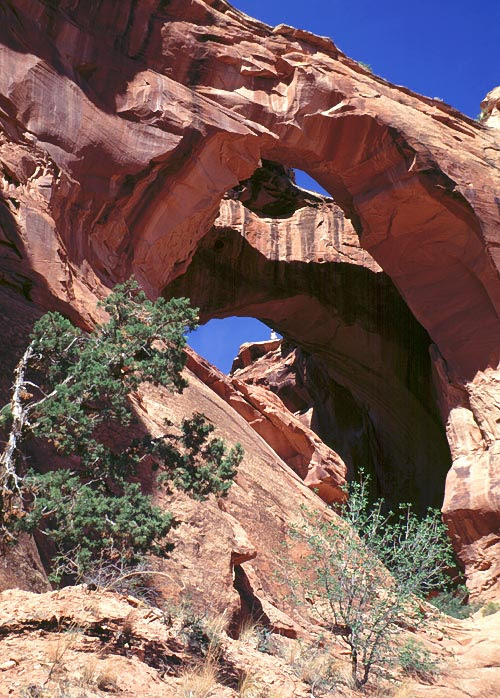 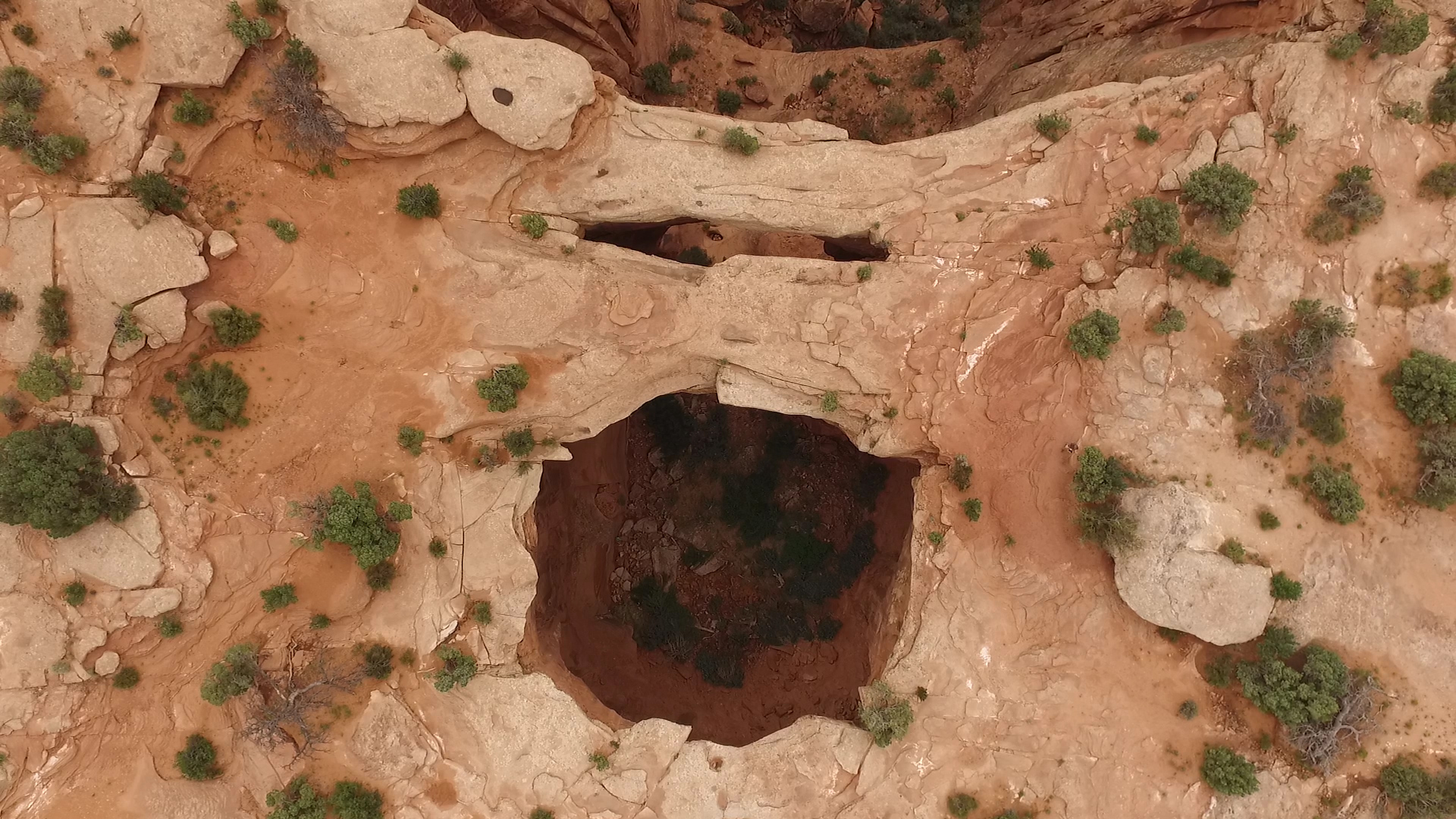 [Left photo from below the Bridges on Bull Canyon Trail; Right photo from the drone at 100′]

Gemini Bridges is a popular Jeeping Spot 2 hours from town, but not everybody takes the posted warnings seriously. Four years ago, a boy scout troop took a hike along the top of the arches. One boy thought he could jump the 6ft. span between the arches and fell to his death. Another 19 year old guy drove his Jeep over the arches and plummeted to his death. We weren’t taking any chances.

We simply hung up our hammocks near the famed sight :- 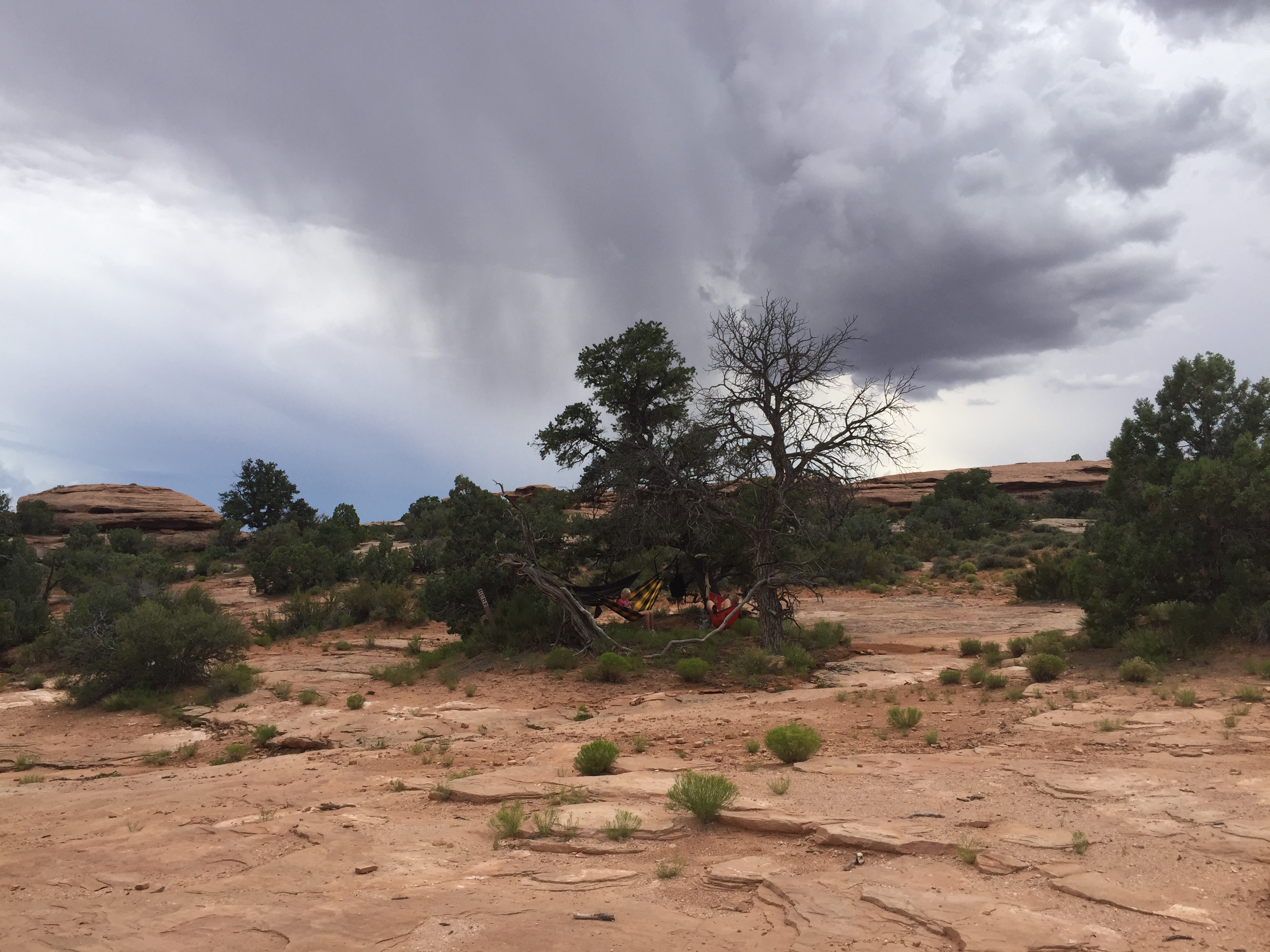 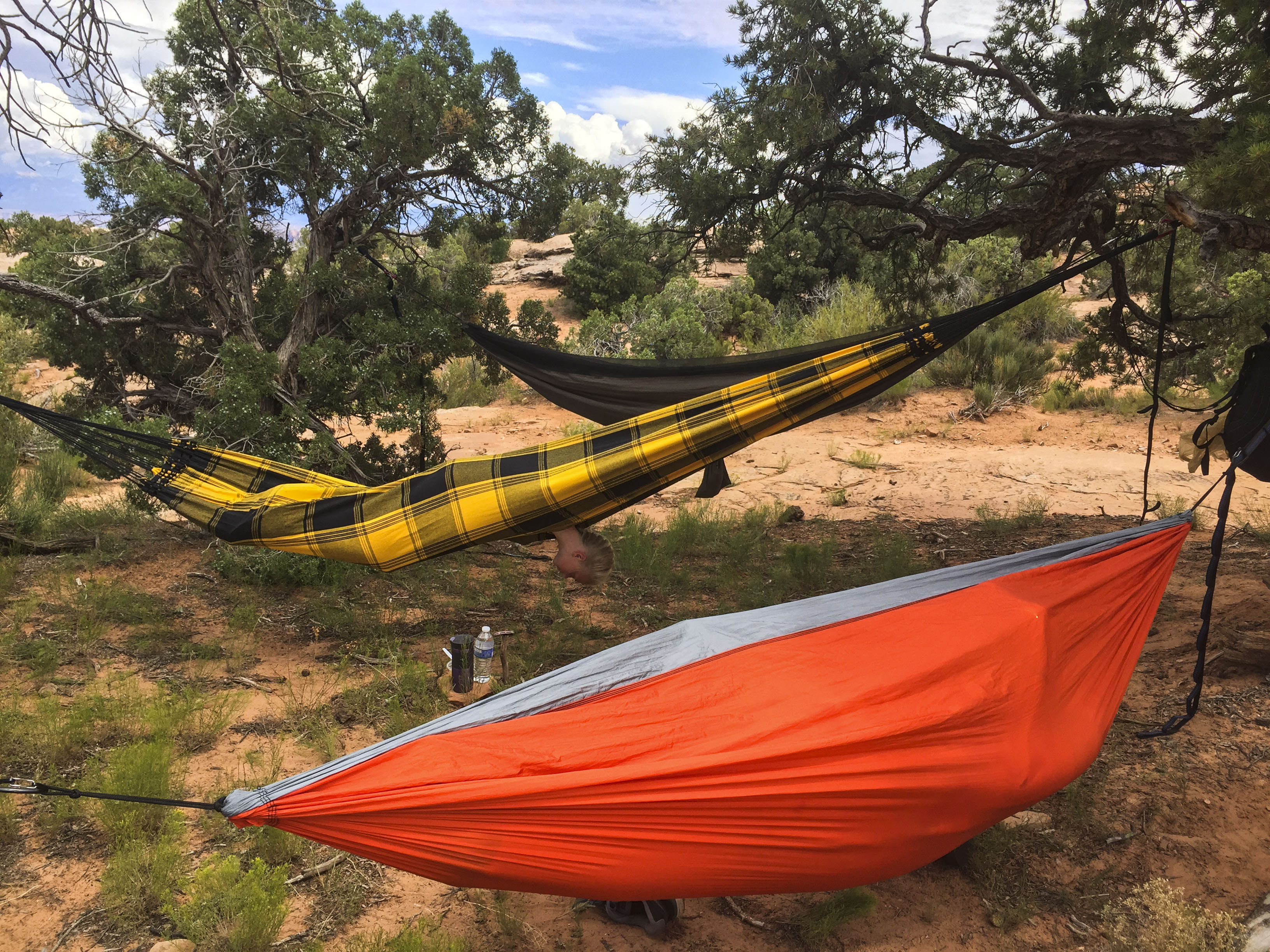 We found a little oasis on the plateau to get settled for a rest. Alyssa had a sweet set-up complete with a “coffee table” rock.

Then we thought we’d get a little drone footage and fly through the arches–something dramatic for the blog.

Like we needed more drama in Moab! The drone came crashing down the walls between the arches.

(This place is reminiscent of the Bermuda Triangle stories!) 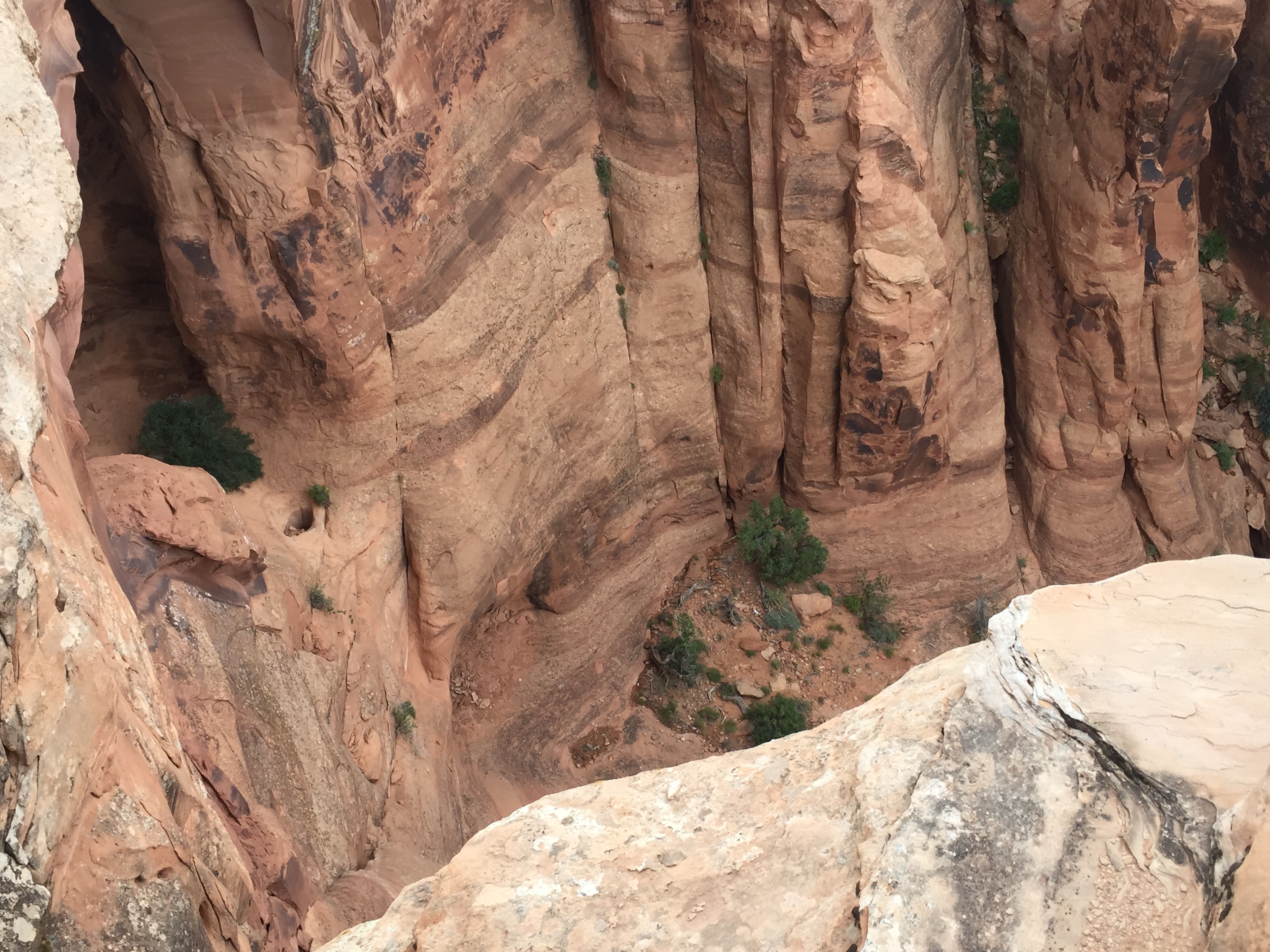 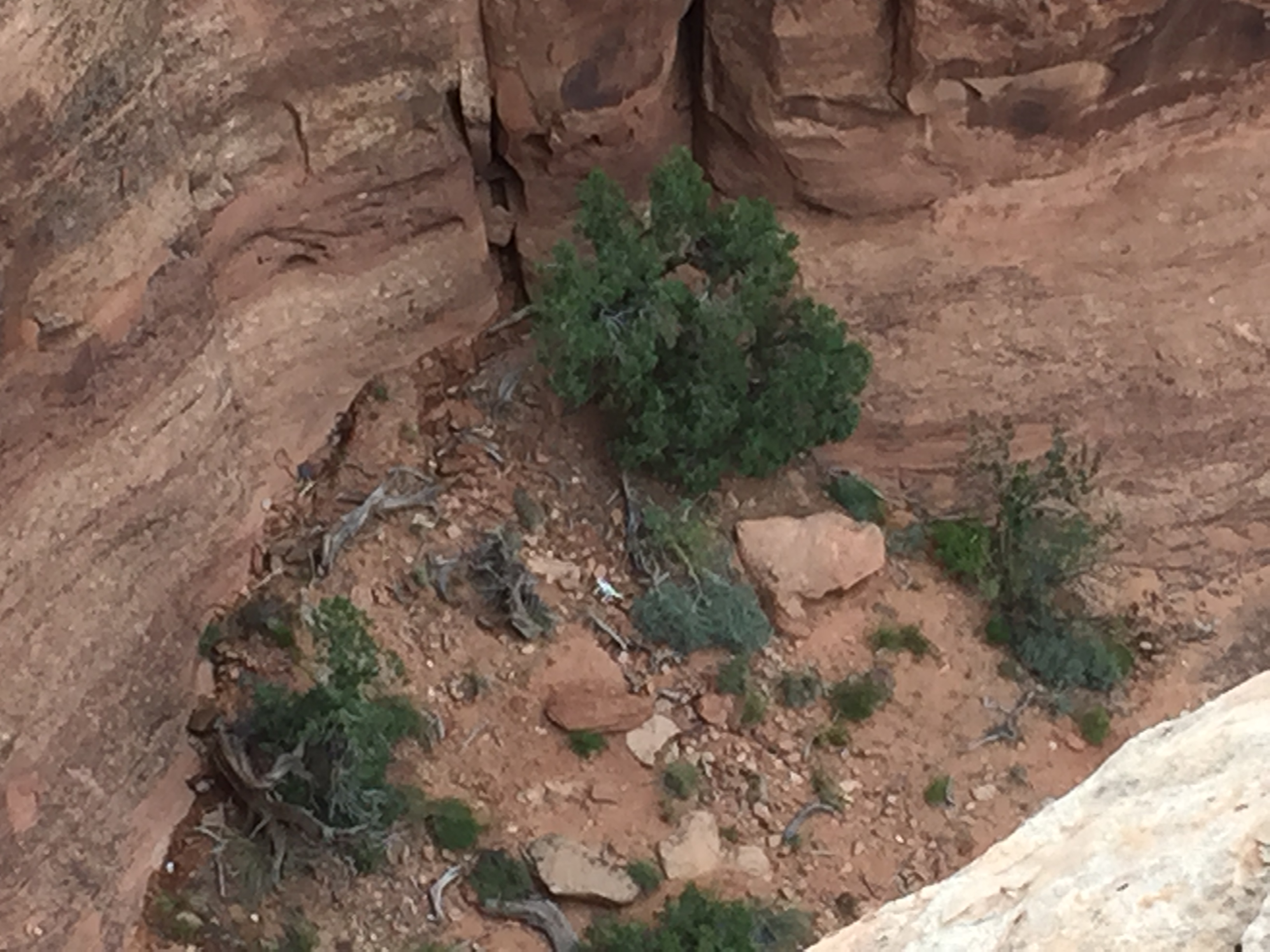 It landed somewhere down here on a shelf way below the arches, but way above the canyon floor. Maybe you can see the little white crashed drone in the above pictures… The only access would be from Bull Canyon, another hour Jeep drive. 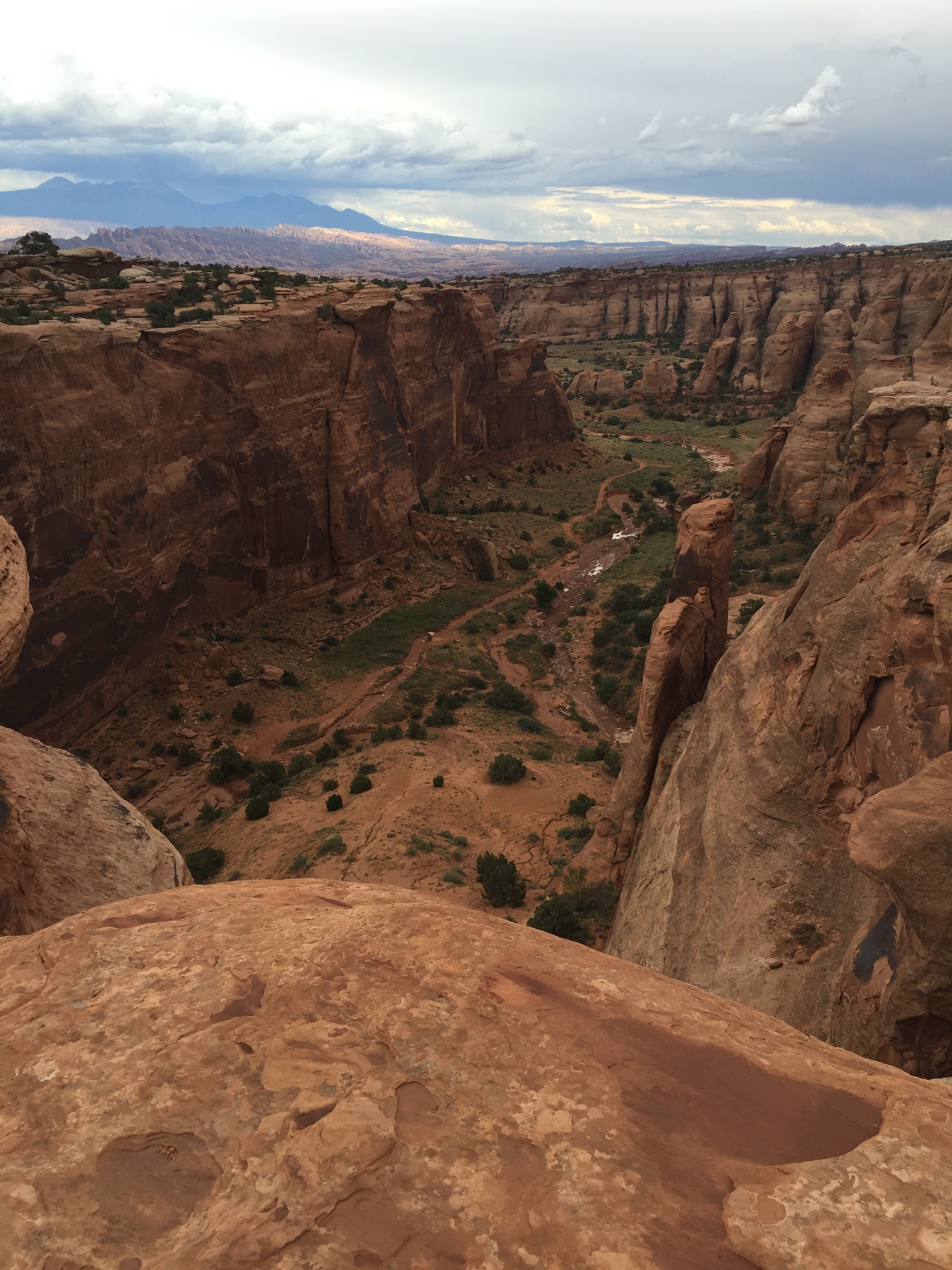 Bull Canyon is meant more for hikers and small ATVs, but the fearless Jeep crew was on a recovery mission, so . . . onward and downward!

Once the Jeep was at the bottom, there was no easy access to the shelf on which the drone lay. 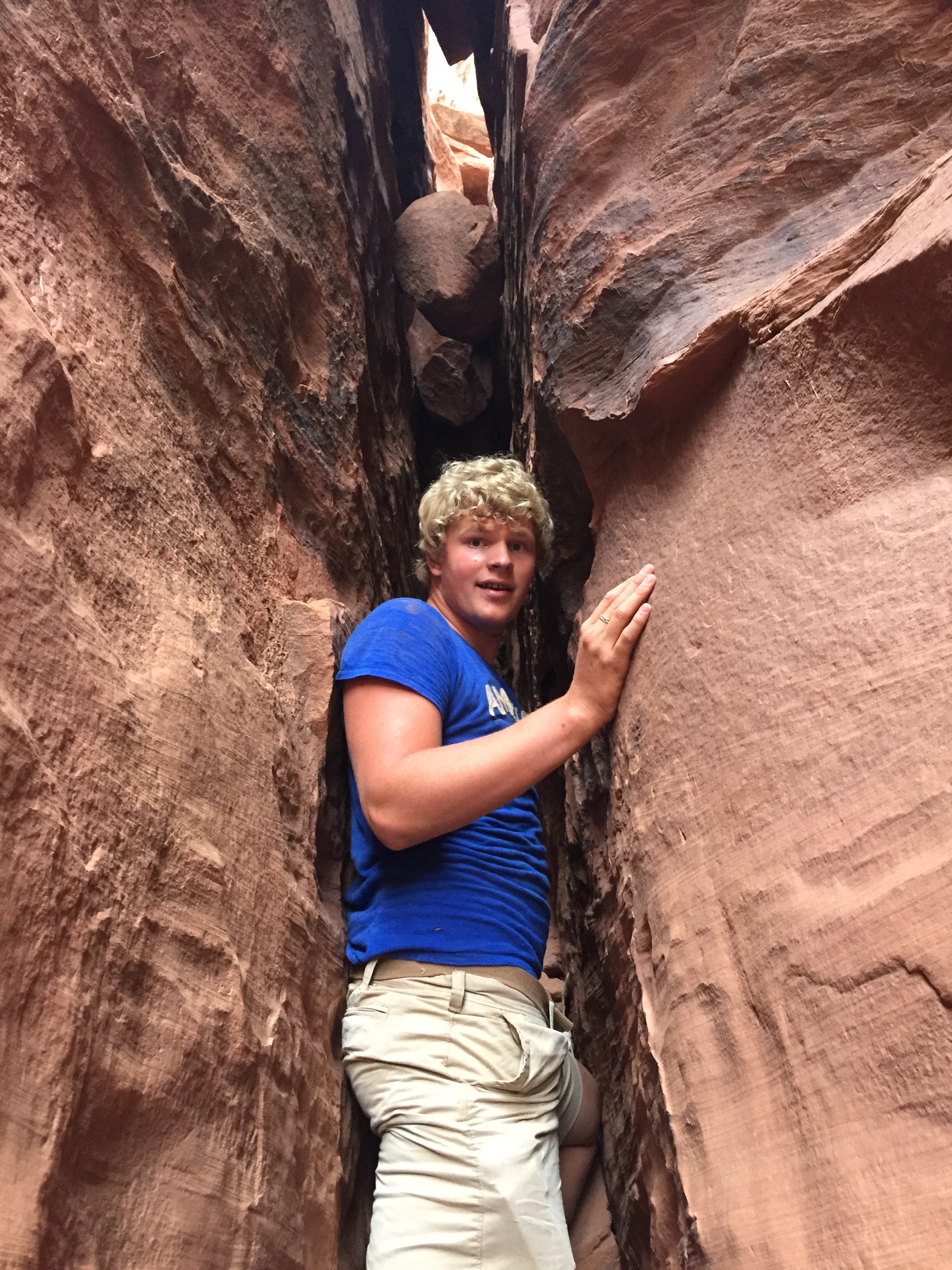 Hmmm…perhaps someone could shimmy up this crevice to the shelf above? J.S.Fenlason to the resuce! All those push-ups and squats really paid off! 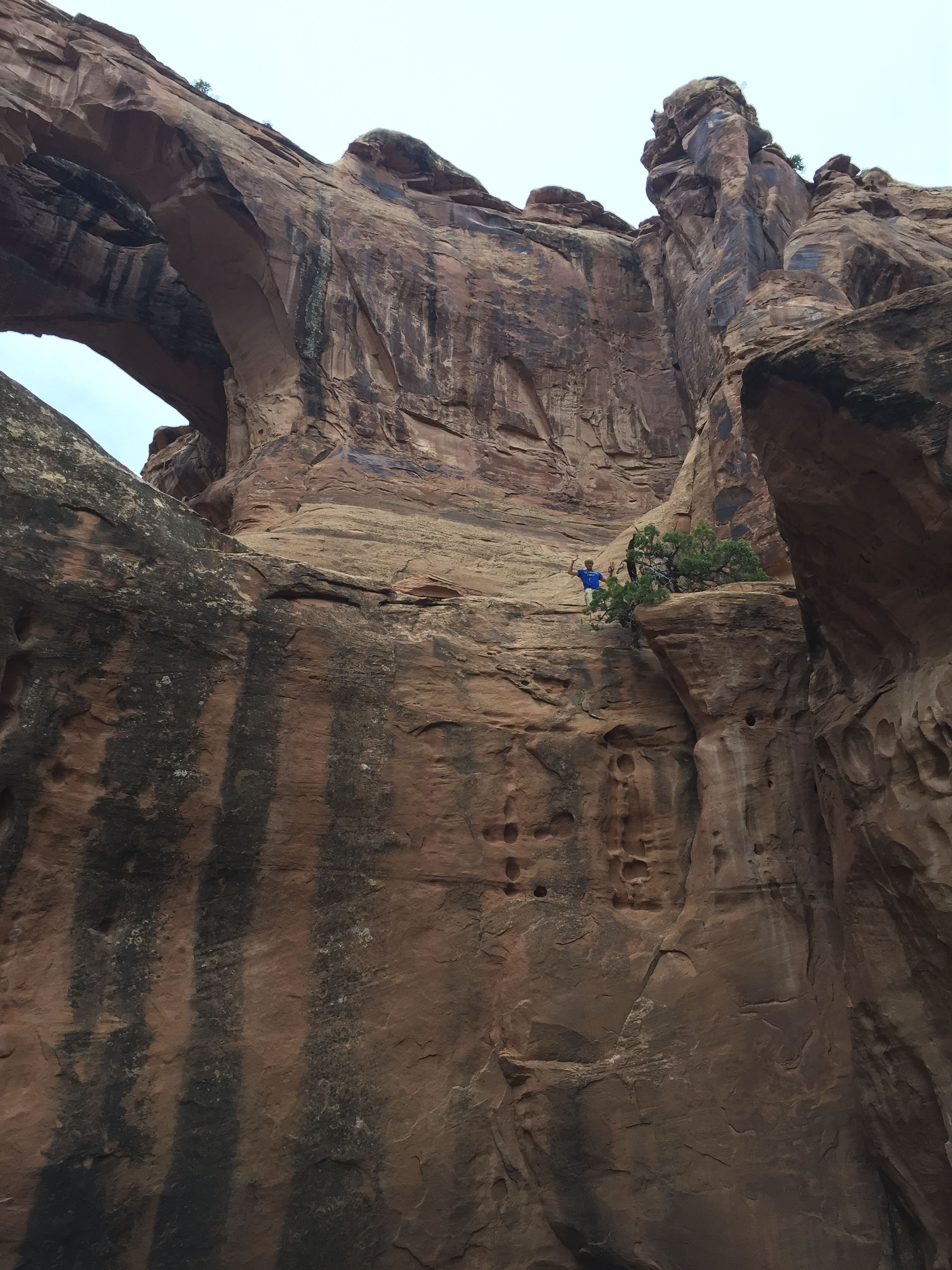 Victory! See Jordan up there?

The drone was recovered. Pieces of it were strewn along the high rock shelf, but the video card was intact! (The video from that will be assessed and applied to the final video production at the end of the trip . . . we hope. 🙂 )

FYI: There was an error received just before the crash that should be covered by warranty. We shipped it to CA and hope to have it back by the time we get to FL.

Above is the actual crash video! 🙁

The last two days in Moab were a bit more than we planned for. But that’s what makes life (and blogs) interesting . . . all the interruptions.