Today we took the public train ($free all summer) into Portland (about 15 minutes from the RV park).  First stop: the “Saturday Market” which actually is open Sundays too in the summer.  It’s a mix of flea market, craft show, and artisan fair.  Each booth must be manned by the artist and everything for sale must be hand crafted by the artist.  Rochelle’s favorite booth had fragrant soaps fashioned into the appearance fudge, truffles, and cookies.  Performers, musicians, and food vendors vied for attention.  It felt safe, but reminded me of the Jerusalem market in Israel. 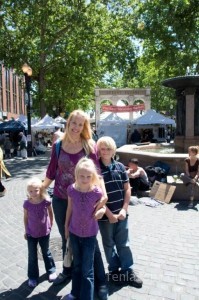 The Saturday Market (on Sunday) 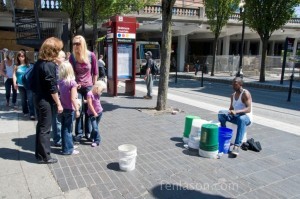 Watching a street performer playing drums on his buckets as Alyssa showed off her dance moves. 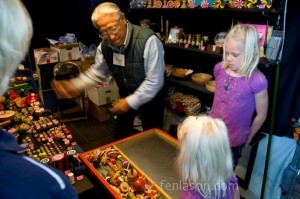 All three kids enthralled watching a toy maker demonstrating how to throw an old-style top.  He was selling his three stage tops for $60!

Next stop:  The WORLD’S largest bookstore, Powell’s Books.  They claim to stock every book currently in print as well as many very rare and expensive books.  They also buy 3,000-4,000 used books each day (turning away twice this many) and stock them side by side with new copies of the same titles.  We had fun in the rare book room.  My Dad found and purchased two book of significant family importance that he had always hoped to find.  One book he had been looking for for 30 years!  Even the kids had fun spending most of their time in researching “lizards” in the books about pets. 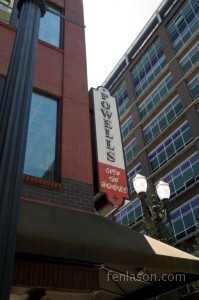 Powell’s Bookstore (it takes up a whole city block) 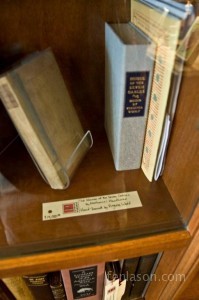 Inside the “rare room” they had this original edition of “House of the Seven Gables” by Nathaniel Hawthorne that was hand bound by Virginia Wolf for only $14,000.  I now know what to look for at garage sales!! 🙂 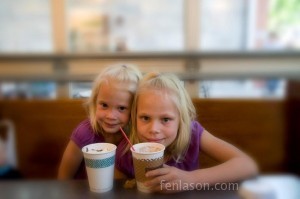 Alyssa & Carlye drinking their hot cocoa at the coffee shop around the corner.

We walked all around the city and through a park where some of the many Portland homeless slept.  Our friendly little Alyssa was tempted to wake this one man until her eye caught the elephant statue that her sister had climbed. 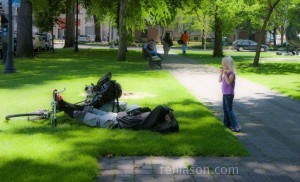 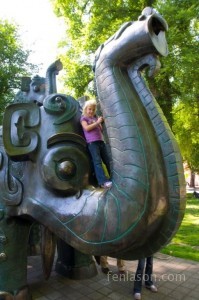 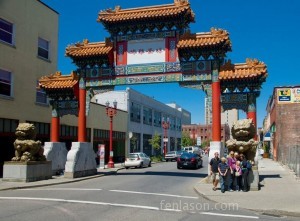 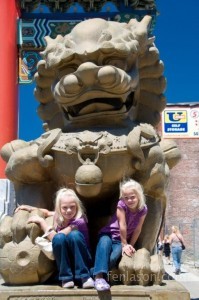 The gateway to Chinatown in Portland guarded with a pair of  lions. 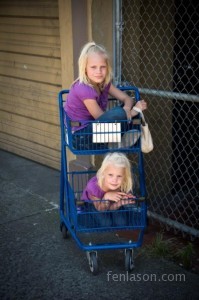 We couldn’t pass up the buy one get one free deal on these cute blond kids!! 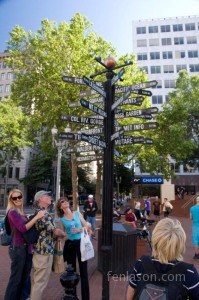 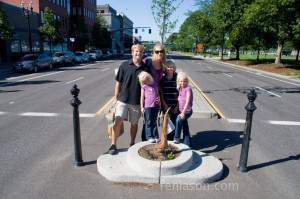 OK, take a good look at this little concrete planter in the middle of the road.  What you are looking at is actually in the Guinness Book of World Records.  It is the smallest park in the world!  Honest!!

Mills Ends Park is a small (this is obvious) park that was created on St. Patrick’s Day 1948, to be a colony for leprechauns and a location for snail races (as the story goes). It is the smallest park in the world, according to the Guinness Book of World, which first granted it this recognition in 1971. The park is a circle 2 ft (0.61 m) across, with a total area of 452 sq in, in a traffic median which in 1948 was intended to be the site for a light pole. When the pole failed to appear and weeds sprouted in the opening, Dick Fagan, a columnist for the Oregon Journal, planted flowers in the hole and named it after his column in the paper, “Mill Ends”. Fagan’s office in the Journal building overlooked the median in the middle of the busy thoroughfare that ran in front of the building and was then known as SW Front Avenue.  Fagan told the story of the park’s origin.  He looked out the window and spotted a leprechaun digging in the hole. He ran down and grabbed the leprechaun, which meant that he had earned a wish. Fagan said he wished for a park of his own; but since he had not specified the size of the park in his wish, the leprechaun gave him the hole. Over the next two decades, Fagan often featured the park and its head leprechaun, named Patrick O’Toole, in his whimsical column.   And now you know…

The small circle has featured many unusual items through the decades, including a swimming pool for butterflies—complete with diving board, a horseshoe, a fragment of the Journal building, and a miniature Ferris wheel which was delivered by a full size crane.  When we visited all that was there was a half dead banana tree… oh well. 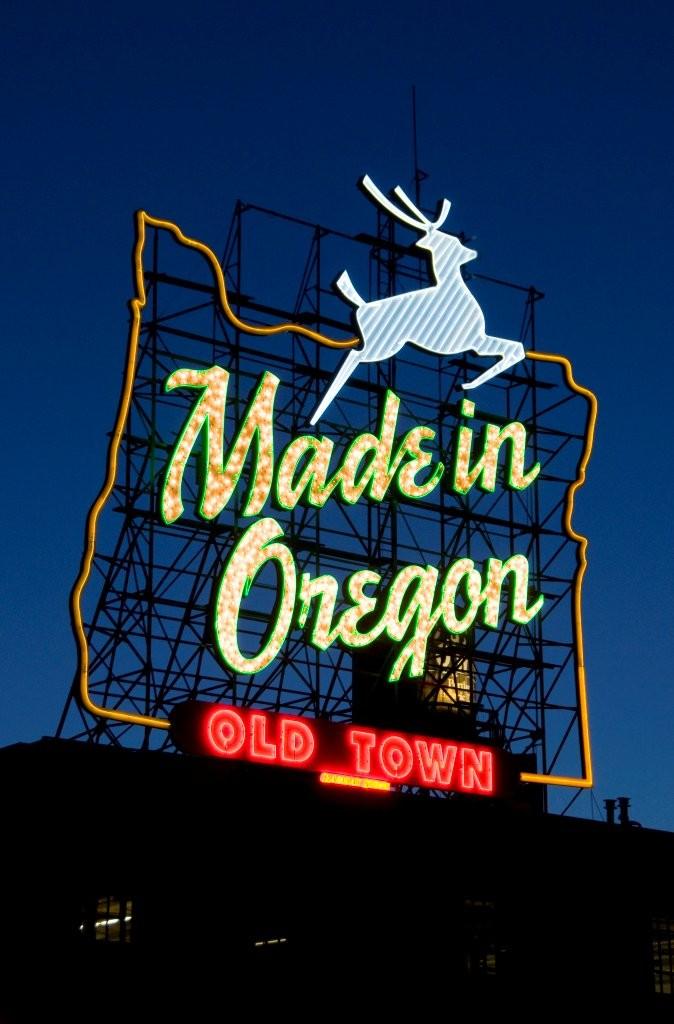 As you enter downtown Portland on the Burnside Bridge you can’t miss the huge landmark neon “Made in Oregon” sign on a rooftop.  Built in 1940 for the White Satin Sugar Company, it was changed in 1957 to read “White Stag” by White Stag Sportswear. Owners of the Made in Oregon chain re-branded it to display “Made in Oregon” in 1995.  Recently the sign caused controversy as a change in tenancy brought about a proposal to change the sign to read “University of Oregon.”   Just last month is was decided to change the sign to simply display “Oregon.” The deer will stay.  By the way, the deer’s nose goes red during the holidays.

Rochelle was with me when I took this shot around 9:00 PM on a 3 second exposure using a Singh-Ray Vari-ND filter to increase the exposure time.